Global average surface air temperature can change when it is either ‘forced’ to change by factors such as increasing greenhouse gasses, or it can change on its own through ‘unforced’ natural cycles like El-Niño/La-Niña. In this paper we estimated the magnitude of unforced temperature variability using historical datasets rather than the more commonly used computer climate models. We used data recorded by thermometers back to the year 1880 as well as data from “nature’s thermometers” – things like tree rings, corals, and lake sediments – that give us clues of how temperature varied naturally from the year 1000 to 1850.

We found that unforced natural temperature variability is large enough to have been responsible for the decade-to-decade changes in the rate of global warming seen over the 20th century. However, the total warming over the 20th century cannot be explained by unforced variability alone and it would not have been possible without the human-caused increase in greenhouse gasses. We also found that unforced temperature variability may be the driver behind the reduced rate of global warming experienced at the beginning of the 21st century.

Temperature, in essence, is a measure of energy. All changes in global average air temperature come about due to an imbalance in the atmosphere’s energy budget [P. T. Brown et al., 2014]. Think of it this way – the atmosphere has an energy budget similar to how you may have a financial budget. In order to accumulate wealth you need to make more money than you spend. Similarly, in order for the global temperature to increase, the atmosphere needs to accumulate more energy than is lost. The Earth receives all of its energy from the sun, but a certain amount is reflected back to space off of things like clouds, snow and ice. The Earth also releases something called “infrared energy” to space. When the global temperature is stable, the amount of solar energy coming in equals the amount of energy reflected and released to space, creating a balanced energy budget.

There are many factors that can change the Earth’s energy budget and thus the average surface temperature. Forced temperature change is a change in temperature that is imposed on the ocean/atmosphere system from a source that is considered to be outside of the ocean/atmosphere system. Examples of “forcings” include changes in the brightness of the sun and changes in concentrations of greenhouse gases due to human fossil fuel burning. However, global surface temperature can also change naturally without any outside forcing. Fittingly, this is referred to as “unforced” temperature change. Unforced temperature changes come from natural ocean/atmosphere interactions that can cause an imbalance in the Earth’s energy budget. The El-Niño/La-Niña cycle in the Pacific Ocean is the most well known example of unforced variability. During La-Niña years, an unusual amount of energy is taken up by the Pacific Ocean, which causes a net loss of atmospheric energy and thus short-term global cooling. The opposite of La-Niña is El-Niño. During El-Niño years, excess energy enters the atmosphere from the Pacific Ocean causing an energy surplus and short term global warming. Natural variability in clouds and snow/ice can also change how much solar energy is reflected back to space and thus can affect the average surface air temperature (see [P. T. Brown et al., 2015a], [P. T. Brown et al., 2015b], [P. T. Brown et al., 2016] for more details).

Now, imagine that the man walks the dog one hundred times and follows the exact same route each time – the path of the dog would be slightly different each time. Analogously, if we could go back in time to the beginning of the 20th century and re-run climate history with the exact same changes in greenhouse gasses (as well as other global temperature forcings that I have not mentioned), the temperature progression would be slightly different each time because unforced variability would be different. 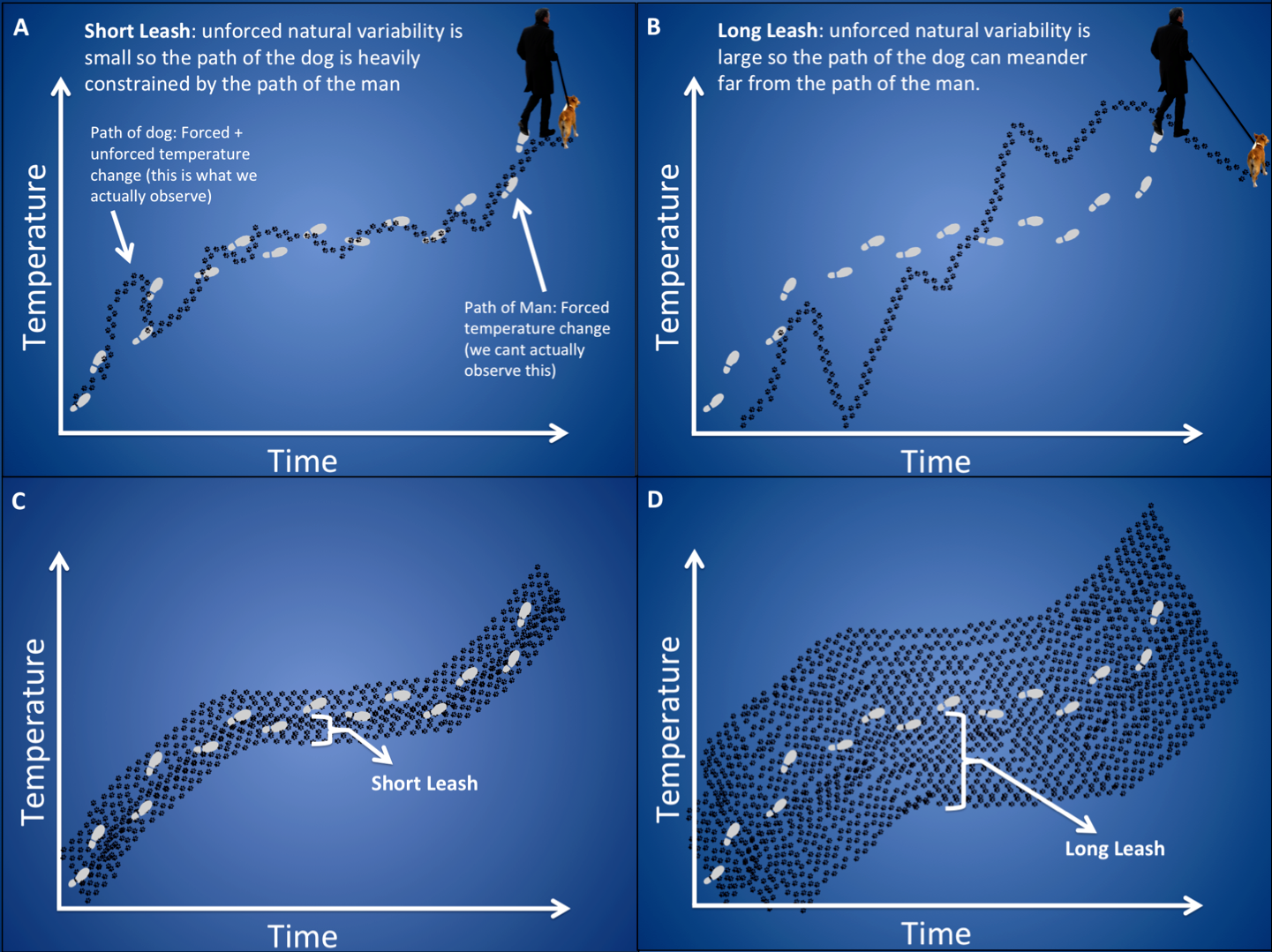 The most commonly used tool for determining the size of unforced natural variability is the “global climate model”. Global climate models are computer programs that use our knowledge of physics and geography to simulate the Earth’s oceanic and atmospheric circulations. Thus, these climate models actually simulate energy imbalances in order to estimate global surface temperature changes. When a climate model is run, it simulates a single possible trajectory of the temperature progression. The size of unforced variability is inferred from a computer climate model by running it many times with the same forced temperature changes but with slightly different histories of natural unforced cycles – histories that could have happened. This is analogous to figuring out the length of the leash by observing the height of the sum of the dog’s paths (Figure 1: C and D).

Our new way to estimate the size of unforced variability

Several recent studies have suggested that global climate models might underestimate the magnitude of unforced natural temperature variability ([P. T. Brown et al., 2015a]; [K. L. Swanson et al., 2009]; [M. G. Wyatt and J. Peters, 2012]). Considering this, it is valuable to estimate the size of unforced variability from an independent source. In our study, we estimated the size of unforced variability by examining the historical record of temperature change in two types of datasets. We used the “instrumental record” from the year 1880 to 2013, which represents the temperature record measured directly with thermometers. This record is relatively short, so we also used “proxy reconstructions” of temperatures from the year 1000 to 1850. Proxy reconstructions represent estimates of historical temperature that come from “natural thermometers” present in the environment. Some examples of natural thermometers include tree rings, corals, pollen, ice layers, stalactites, and lake sediments.

Implications of our new estimate of the size of unforced variability

We found that unforced variability is large enough to have accounted for decade-to-decade changes in the rate of global warming over the 20th century (Figure 2: B). This means that unforced variability is a little bit larger than most global climate models have traditionally indicated. However, our results made it clear that unforced temperature variability is not large enough to account for the total global warming that has been observed since 1900. Therefore, our study confirms that forced temperature changes, such as those from human-caused increases in greenhouse gasses, were necessary for the Earth to have warmed as much as it did over the past century [N. L. Bindoff et al., 2013]. 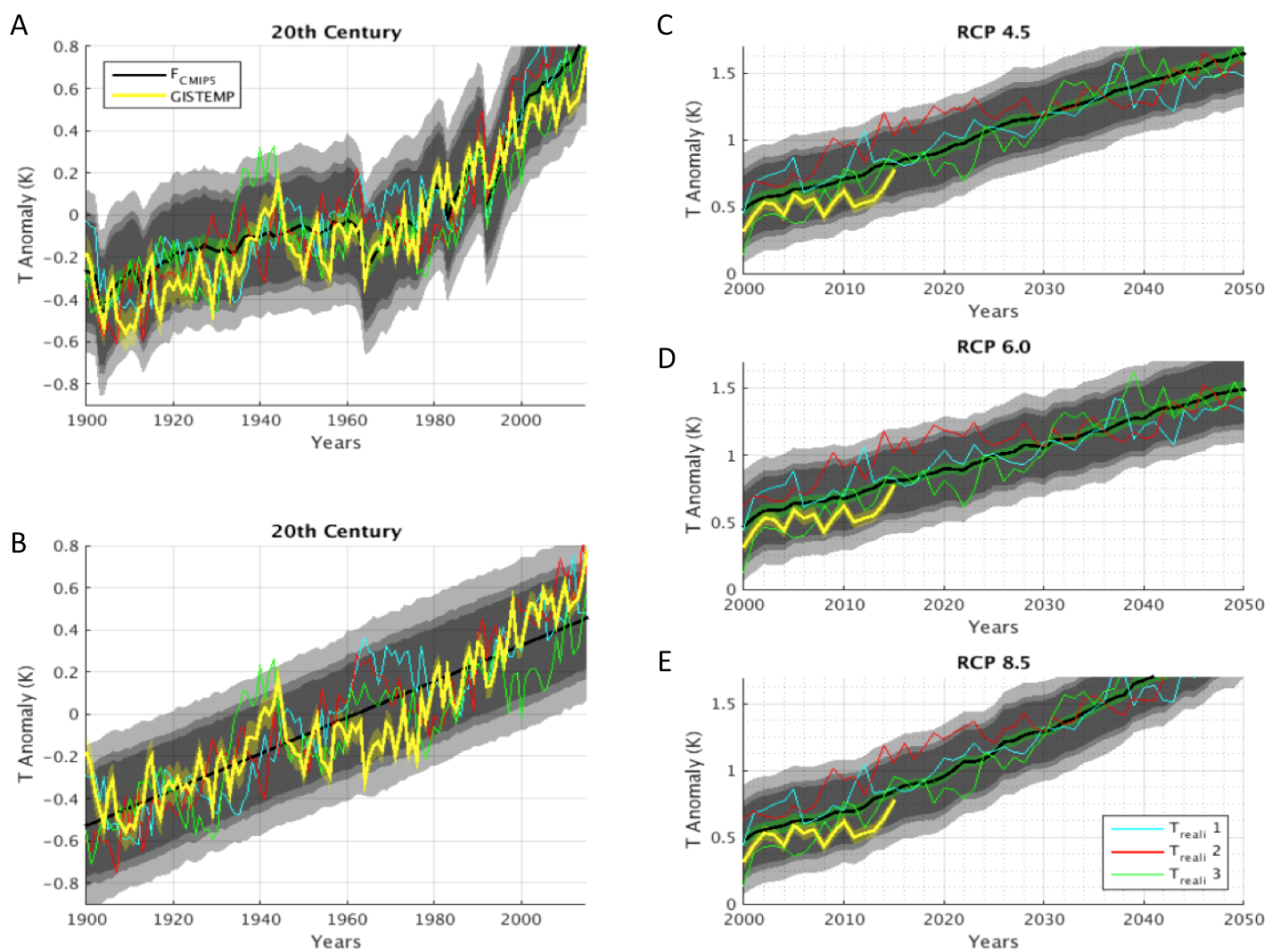 Our findings also have implications for the first decade of the 21st century. We know that well-mixed greenhouse gasses, which cause forced temperature change, increased substantially since the turn of the century. However, global temperatures rose very little between 2002 and 2013. If unforced variability was found to be very small, the above two observations might imply that greenhouse gasses don’t cause as much warming as previously thought. However, since we found that unforced variability is relatively large, it suggests that the temperature we observe can meander substantially away from the underlying forced temperature changes. Therefore, we should not be surprised to see a period of a decade-or-so without global warming even as the forced temperature change continues on its upward trajectory (Figure 2: A). This is simply a situation where the man is progressing upward while the dog is walking down. The leash may be longer than previously thought but there is still a leash. As long as the man continues on his upward trajectory, the leash will eventually pull up on the dog (Figure 2: C, D and E) and the long term global warming trend will continue.