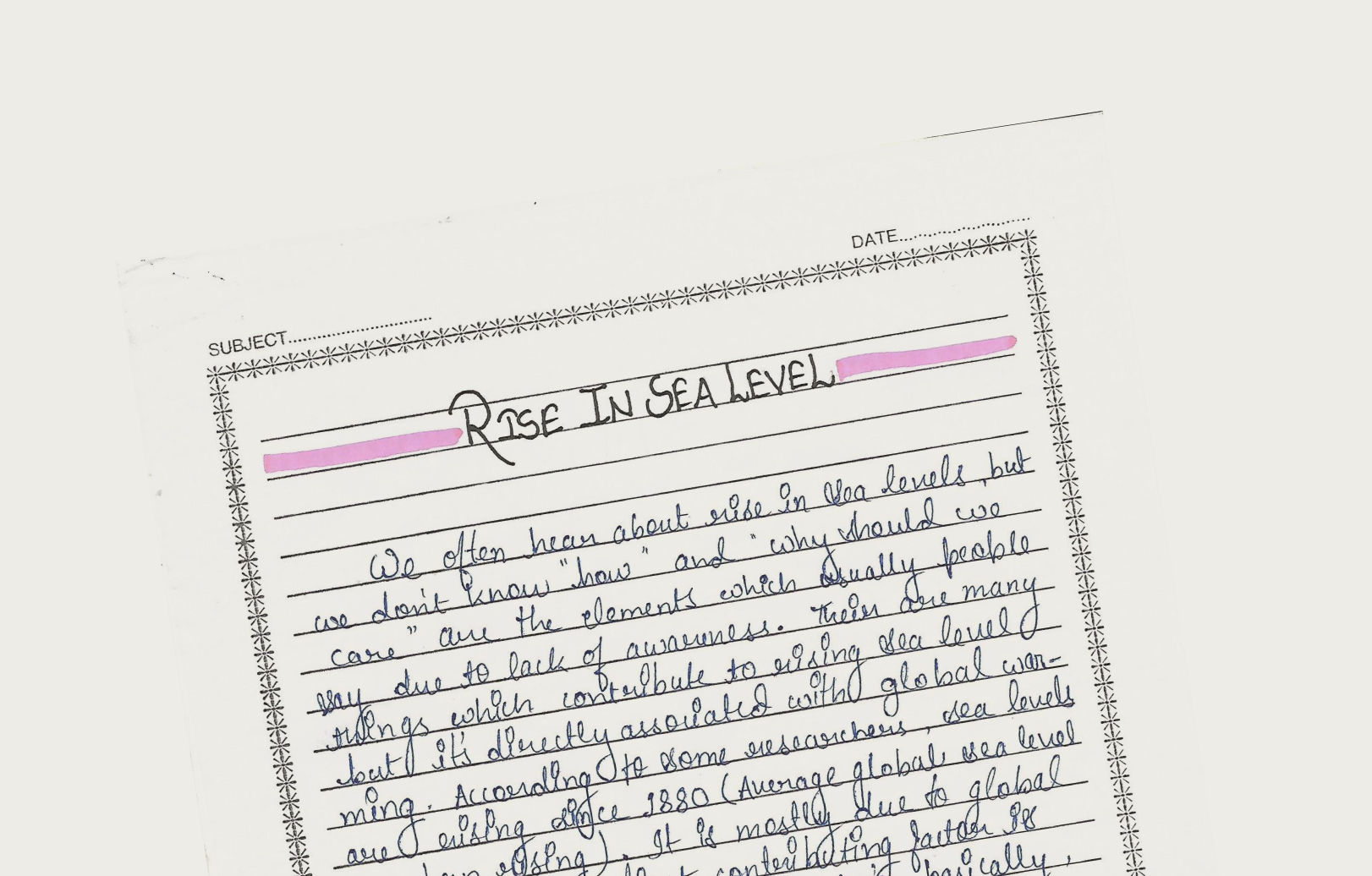 I am native to Raigarh, Chhattisgarh, in India, currently I am in 12th grade pursuing Biology and Mathematics as my core subject at the O.P. Jindal School.

The O.P. Jindal School is dedicated to educational transformation in society. Located in the city of Raigarh in Northern India, the school caters to around 5,600 students. The academic and co-curricular programs are based on the school’s mission principles, designed to foster inter-cultural understanding and world citizenship, environmental stewardship, the value of physical labor, and service to humanity with a willing spirit.


Sea level rise has manifold impacts, affecting systems such as drink water and food supplies, wildlife and ecosystems and local and global economies.

We often hear about rising sea levels, but we don’t always know “how” this is happening and “why we should care”. There are many things which contribute to rising sea level, but it’s directly associated with global warming.

According to researchers, average global sea levels have been rising at least since 1880. This is due to global warming, through two main contributing factors. The first is ‘thermal expansion of sea water’: basically, when water heats up, it expands because warmer water simply occupies more space. The other main contributing factor is the melting of glaciers and icecaps. Glaciers and ice caps naturally melt a bit every year during the summer season, and snow fall during winter normally balances the melting. But recently what we are observing is that higher temperatures have led to more melting of glaciers in summer and less snowfall in winter, which is creating an imbalance which results in the loss of glaciers and ice caps.

The rise in sea level has a huge impact on, for example, several costal parts of India like West Bengal, Kerala, and Orissa. Sea level rise exposes coastal regions to more coastal disasters, to erosion and to land loss and as the population in India is growing at an accelerated rate this will cause serious issues in India.

The rise in sea level is expected to accelerate during 21st century. Sea level rise is one piece of a larger puzzle of climatic changes and there is a need for better understanding of our climate system as our world is warming rapidly. As all pieces of this puzzle work and interact together, to fully understand one piece, researchers need to understand all the other pieces of the puzzle too.

Climate research has led to the development of computer models with which we can better understand the effect of one piece of the puzzle on the others. The main elements contributing to sea level rise based on 2018 figures are estimated as:

Climate scientists expect the rate to further accelerate during the 21st century[1].

All these factors which we have seen above will cause sea levels to increase and coastal areas all over the world will become vulnerable. Although flooding is what comes to mind first, there are many more other impacts of sea level rise like:

As the sea level will rise farther and farther up the shore it will seep inside the groundwater and contaminate the freshwater sources which many coastal areas rely on for drinking water. As salt water is not safe for drinking, people have to invest in costly desalination plants and this kind of costly project may be unrealistic for communities.

Those fresh water supplies which we use for drinking, we also use for irrigation and advancing salt water could harm crops.

Fish used for human consumption are poikilothermic, also known as cold-blooded (in other words, their body temperature varies based on their surroundings). Any changes in habitat temperature significantly influences their metabolism, growth rate, productivity, seasonal reproduction, and susceptibility to diseases and toxins.

Many forms of wildlife like shorebirds and sea turtles will suffer as the rising sea level erodes shorelines and floods the area where coastal animals live. Sea turtles are already endangered. Their delicate eggs may be swept away and we can’t afford to lose any. Their habitat may be so damaged that they can no longer survive in their current environment.

The rise in the sea level will hurt the economy in many ways like increasing costs of helping people during floods. It will also affect the tourism and real estate of coastal areas. Beach front properties and many other areas are washed away by rising waters.

Building tall walls and similar structures might help reduce sea water intrusion up to a certain level but at huge cost. Planting and maintaining mangroves – groups of trees and shrubs that grow on coasts – is considered a potential natural mitigation because they reduce the intensity of waves crashing the shore line and also help in reducing impacts in case of sea level rise.

The most important and sustainable measure is to reduce the carbon emissions that are causing climate change and sea level rise. If global warming can somehow be mitigated substantially, then the sea level rise can also be minimized and controlled.

Sea level rise is a major indicator of ongoing global change. Sea level has been rising at rates of up to 17mm per decade in the 20th century, and this number is projected to increase significantly in the 21st century. Human activities that add greenhouse gases to the atmosphere and cause climate to change are the dominant cause for recent sea level change. The damage to the natural environment by human activities is very substantial and is increasingly impacting the humans in their daily lives. Therefore, improving public awareness and preventing damage as early as possible through adaptation measures and reduction of greenhouse gases are very crucial to reducing the risks of sea level rise.

I am native to Raigarh, Chhattisgarh, in India, currently I am in 12th grade pursuing Biology and Mathematics as my core subject at the O.P. Jindal School.

The O.P. Jindal School is dedicated to educational transformation in society. Located in the city of Raigarh in Northern India, the school caters to around 5,600 students. The academic and co-curricular programs are based on the school’s mission principles, designed to foster inter-cultural understanding and world citizenship, environmental stewardship, the value of physical labor, and service to humanity with a willing spirit.