Each summer, a rash of lakes forms from ponded meltwater on top of the Greenland ice sheet. These 'supraglacial' (on top of ice) lakes can drain through the ice sheet, delivering their contents to its base. The ice sheet slides on a thin film of water, and when extra water is added to this film (for example from a draining supraglacial lake) the sliding (‘flow’) happens a bit faster. At present, under-ice pipe-like features enable excess water to drain out from under the ice sheet quickly and efficiently. However, in recent years supraglacial lakes have begun to form further inland, potentially supplying water to the base beyond the reach of these features. Here, we use a computer simulation of lake initiation and growth to show that the inland spread of supraglacial lakes will continue as the climate warms; by 2060, 100% more of South West Greenland and 50% more of the whole ice sheet will be populated by supraglacial lakes. Of these ‘new’ lakes, up to half will be large enough to drain, delivering the water they contain to the base of the ice sheet and all of these new lakes will form at locations where we would expect to see an ice sheet speed-up with the addition of more water at the base. If the ice sheet flows faster, it can thin out and melt quicker, thus contributing to global sea level rise. Supraglacial lakes and their impacts are not currently considered in our best predictions of future ice sheet change. Given that they possess significant leverage to affect ice sheet flow, and that they are likely to form (and drain) at locations more sensitive to their impact in future years, it is clear that they need to be accounted for in these predictions as a matter of priority. 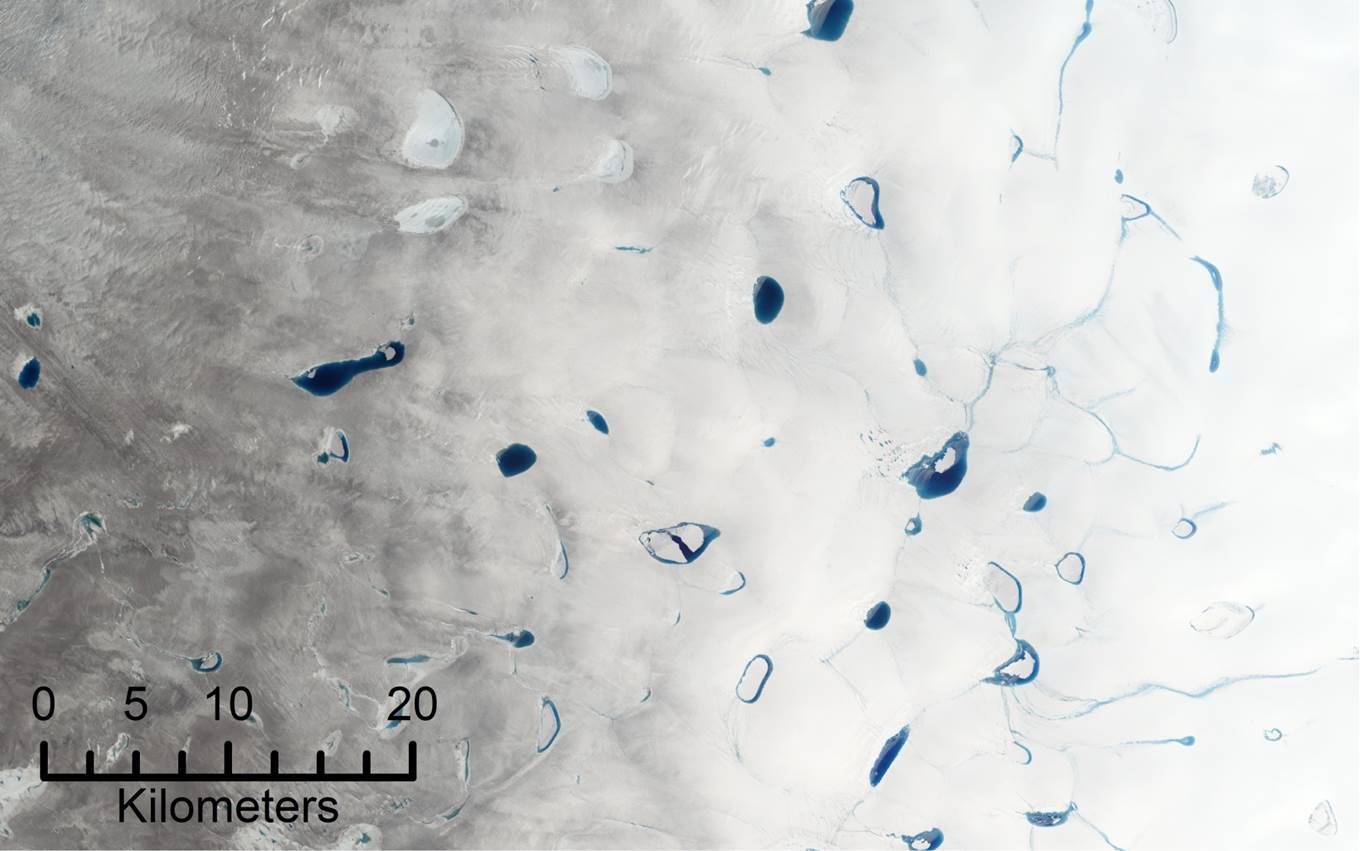 Figure 1: Supraglacial lakes on Greenland from the Landsat-8 satellite

What are supraglacial lakes and why are they important?

Supraglacial lakes appear every year during the spring and summer on much of the Greenland ice sheet and on some Antarctic ice shelves. They form when water from melted snow and ice pools in surface hollows. Because they appear dark blue, they absorb more of the heat from the sun than the white ice which surrounds them and so the ice at the bottom and sides of the lake melts faster allowing the lake to grow [M. Tedesco et al., 2012]. When a supraglacial lake reaches a certain size, the weight of water it contains can break apart the ice it is sitting on, causing all the water to gush down into the ice, and even reach the rock underneath [M. J. Krawczynski et al., 2009]. Glaciers and ice sheets slide on a thin film of water at their base which causes them to ‘flow’ downhill and towards the sea very slowly, like thick pancake batter. If this film of water gets thicker, for example because a supraglacial lake has drained, then the ice can flow faster. Just like pancake batter, if ice flows faster then it spreads out and we end up with a thinner ice sheet. Because air temperatures are warmer at lower altitude (closer to the Earth’s surface), this exposes a greater ice area to above-zero temperatures and so melting. This is particularly important in the interior of the Greenland ice sheet – away from the edges – because the ice is normally thick, high, and cold here.

Motivation for this study

Since 1971, supraglacial lakes have spread inland on the Greenland and now cover a much greater area than they did historically [I. M. Howat et al., 2013]. Most of this change has occurred since around 1995 and is likely due to rapid and extreme climate change in the Arctic during this period [E. Hanna et al., 2012]. At the locations where they are currently found, their ability to affect ice sheet flow is moderated by large pipe-like features that form in the bottom of the ice, and can remove any excess water from the base quickly and efficiently [C. Schoof, 2010]. These ‘pipes’ form when under-ice (subglacial) streams grow large enough, and flow fast enough, to carve channels in the ice overhead. For example they are abundant beneath the edges of the ice sheet where there is a very large amount of water from melting but rare in the interior where there is less water and the weight of the ice sheet presses any potential channels closed. Recently however, supraglacial lakes have begun to form in the interior of the Greenland ice sheet beyond the reach of these features and flow here has sped-up a little bit each year since 2009 [S. H. Doyle et al., 2014]. Despite the fact that climate change is set to continue in coming years, the impact of this warming on where supraglacial lakes form has not yet been considered. Further, the potential impact that they may have on future ice sheet shape has not been included in forward projections of ice sheet change. Since ice lost from the Greenland ice sheet through melting and iceberg calving contributes significantly to global sea level rise (10 % over the last ~20 years [J. A. Church et al., 2013]), it is important to understand all of the processes that affect the ice sheet, in order to produce reliable predictions of global sea level in the future. 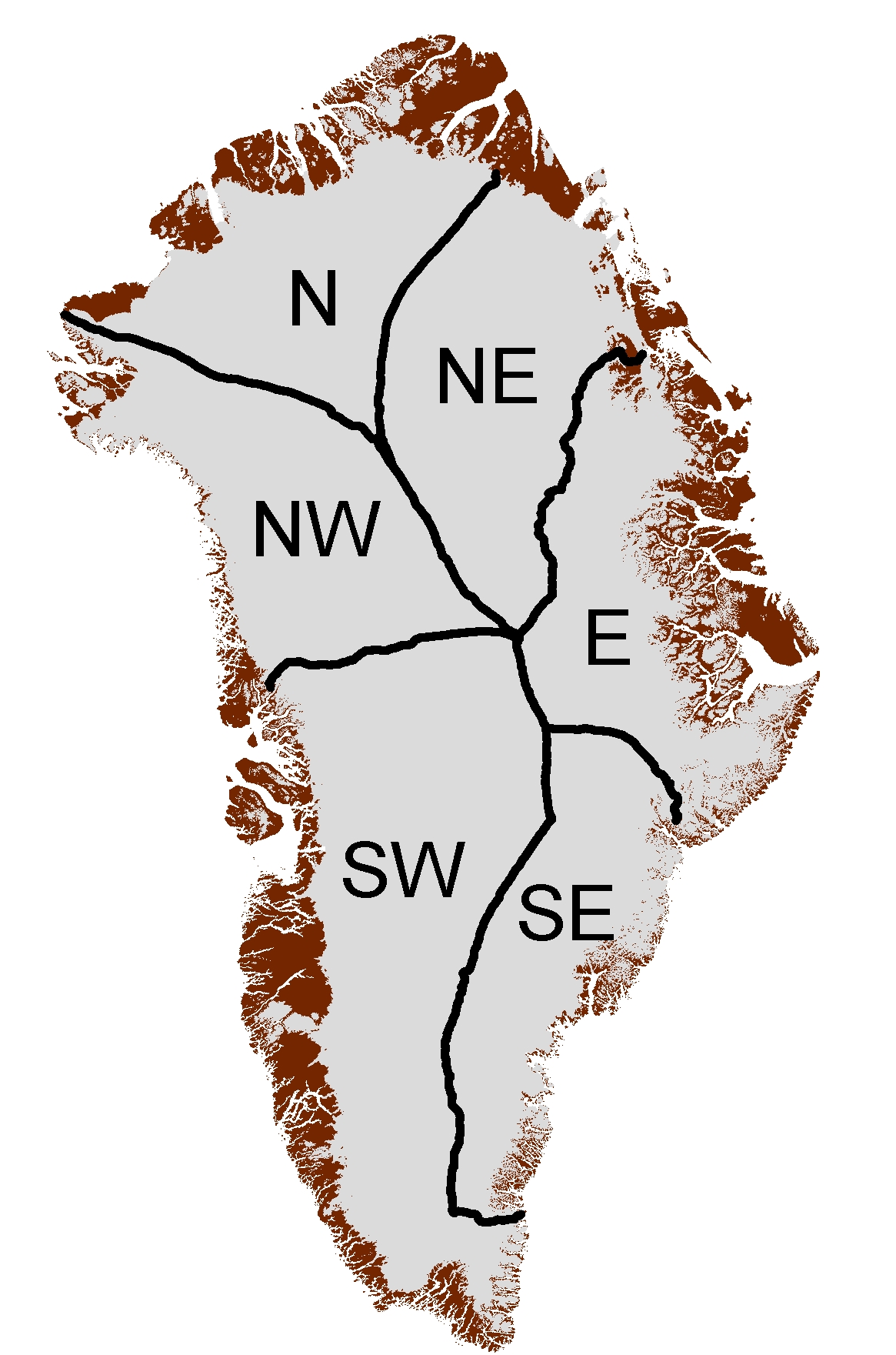 In this study a computer simulation of lake initiation and growth (a ‘model’ [A. A. Leeson et al., 2012]) was used to predict supraglacial lake evolution every year between 1971 and 2060.  The model uses equations describing the flow of water over a surface (the ice) or through a porous material (the overlying snow) to route estimates of meltwater runoff over a very finely detailed map of surface height measured by satellite, allowing the model to pond in surface depressions and form lakes. Here, we focussed on an inland region of South West Greenland near Leverett and Russell Glaciers, because the flow of the ice is known to have sped-up here in recent years [S. H. Doyle et al., 2014]. We can decide whether our model is doing a good job by comparing simulated to observed supraglacial lake evolution. In this case, we predict an inland spreading of lakes of 56 km (~70% further inland) since the 1970s – just a little over the observed figure of 53 km (~67%) derived from satellite imagery [I. M. Howat et al., 2013] – and so we can have confidence in our model. Whilst satellite observations are important (if a thing is observed then we know it to be true) and are necessary to validate computer models, computer simulations offer an advantage in that they are continuous, whereas satellites are unable to take a picture of the earth’s surface at night time or if it is obscured by cloud. Using our model we can ‘fill in the gaps’ of the satellite record and show much more clearly that this recent inland spreading of lakes was relatively slow until 1995 (0.5 km per year) and six times faster since then (3.0 km per year). This dramatic change corresponds to a 2.2°C air temperature rise in South West Greenland, compared to average conditions, which is the most extreme temperature change in this region since records began [E. Hanna et al., 2012].

Figure 3: Maximum elevation (in metres above sea level – m a.s.l.) of supraglacial lakes on Greenland in 1971-2100; lakes which are higher up are also further inland. Observations are given as a vertical black line which gives a range of possible values. Simulation results are shown in blue (thin), thick lines are used to calculate change per year.

How will the distribution of supraglacial lakes change in the future?

The recent rapid warming in the region is thought to be due to both human-induced climate change and natural variability [X. Fettweis et al., 2013]; a particular wind pattern in the upper atmosphere that brings warmer and dryer weather to Greenland has been repeated more frequently than usual in recent years. Based on normal conditions, our model predicts that supraglacial lakes will continue to spread inland in future years, although at about half the present rate. By 2060 we can expect at least twice as much of South West Greenland to be lake-covered; beyond ~ 2050 the lakes spread out of the area we are able to simulate with our current data. However it seems likely that supraglacial lakes could appear over all of the south western part of the Greenland ice sheet by 2100, especially since regular melting is expected to occur over this entire region from about 2050. To investigate potential future changes to supraglacial lake distribution elsewhere on the ice sheet, we looked at the relationship between the maximum elevation at which lakes currently form (the ice sheet gets much higher in the middle) and how far North they are. We then calculated how much higher up (as a %) lakes will likely get in South West Greenland by 2060 and applied this percentage increase to the rest of the ice sheet. Using this method we determined that 50% more of the entire ice sheet will be lake covered by 2060.

Figure 4: Supraglacial lake distribution simulated by the Supraglacial Lake Initiation and Growth (SLInG) model in the Russell Glacier catchment each year between 2000 and 2100 (perspective view).
[“https://www.climanosco.org/files/manpics/9963_LeesonA_Anim1.gif“, A. Leeson]

What are the implications of this change?

Because supraglacial lakes are darker than the surrounding ice they absorb more heat from the sun – just like black tarmac on a sunny day. The result of this is that the ice at the bottom and sides of the lake melts twice as fast as the ice surrounding the lake [M. Tedesco et al., 2012]. Across the whole ice sheet, this only adds up to about half a percent of total melting at present but will increase to around 1% (of total melting, 7-9 Gt per year) by 2060 if the area covered by lakes increases as expected. Perhaps more worrying is the potential that these ‘new’ lakes have to drain and perturb the flow of the ice sheet. Using the thickness of the ice, and the weight of water required to break it apart, we identify that up to half of the ‘new’ lakes will be large enough to drain and deliver their contents to the ice sheet base. The latest projections suggest that Greenland will contribute up to 22 cm to future sea level rise [J. A. Church et al., 2013]. However, these estimates do not include the potential effects of supraglacial lakes on melting and ice sheet flow. Although our findings show that their contribution to melting is likely to be modest in future, it is clear that supraglacial lakes large enough to drain will in fact spread far inland as the climate warms, suggesting that predictions of future ice sheet state should be revised to account for this. It is now a matter of some urgency that the effects of supraglacial lakes be accounted for in these predictions and establishing the degree to which the inland spread of SGLs will affect ice sheet flow in coming years is of particular concern.